This has not been the best summer here in the UK. However, for climate change enthusiasts it’s been perfect, clearly demonstrating that even world famous weatherman Michael Fish would be absolutely no use at all in knowing which way the wind was likely to blow in the next Five hours. So , for a group of intrepid teachers , students , concrete inspectors, radiologists and lawyers including at least Two children, from the Bohemian town of Kladno, what better time to take a trip in a minibus around the South West of England!

Zdena Biggsova has been bringing Czechs to Britain for many years now and was instrumental in our original contacts with Prague 6 district. Retiring from her school in Prague to continue working in the nearby town of Kladno she has in the past continued her trip organising including jaunts to Ireland, Scotland and London in recent years. This year her merry band of chums flew in to Bristol on a lovely sunny August evening and were whisked away by us to the Swiss Chalet style  youth hostel on the Polden ridge near the shoe town of Street and overlooking Glastonbury Tor.

The next morning it rained. At least the jolly cyclists who also stayed over that night on their way from John O Bonkers to Lands End would get totally soaked. Or at least blown off their bikes.

We took the Czechs to Glastonbury Tor. ‘Walk up there and then walk down quickly before it rains’ we advised. That didn’t work. Dripping wet they had a little wander round the hippy shops and then rinsed themselves out in the minibus.

Would it brighten up at Wells? Well, not that you’d notice. Still, the Cathedral was indoors. And Cheddar? Right, enough of this , let’s get some fish and chips. So that cheered everyone up. 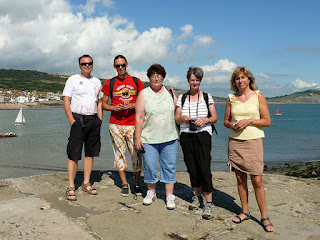 So the trick is-eating fish and chips makes the sun come out -and don’t let anyone tell you otherwise. Getting back into the minibus in now glorious sunshine we went off to Weston Super Mare, teeming with tourists, brandishing ice creams,candy floss, wearing ‘kiss me I’m a scrubber’ hats and with a not unpleasant view of Cardiff from 20 miles away the day had brightened up.

So we took them to Bridgwater where a little party was waiting for them in the Green Olive restaurant on West Quay and after that we all popped along to the Fountain inn where they mingled with the locals, trying out the Guiness, the Cider,the Whiskey , the accent, not for one minute expecting the weather would go mental again.

The next day we brought them back into town to do some shopping and explain why the West Quay wall had fallen into the river. For a full report see www.westoverward.co.uk. And to dispel any notion that all Brits weren’t nutcases we left them in the capable hands of Wildman Napthine, a Bridgwater exile to Moravia currently back home on a succesful curry seeking mission.

And then off to Minehead- still sunny. Then Dunster – not only sunny but Medieval AND with a shop boasting a  chocolate fountain which you could dip your strawberries and marshmellows in. 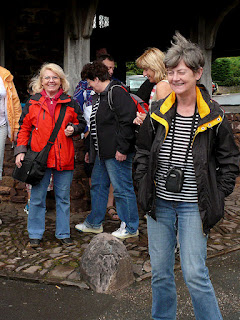 What better time to drive through the Exmoor hills and down the Exe Valley, by passing Tiverton and calling in at Exeter then on to Dartmoor. Where it rained. And then got misty. And then flooded.

Still, we weren’t detered from treating them to a typical Moorland banquet. After the  Tortillas , Enchilladas and Guacamole dips, they were contented enough to contemplate the next days trek across the Baskerville landscapes to Laughter Tor, Gigglesome Brook and Daftarse Gully as promised.

Not only did it rain, flood, got misty then rained some more, but we couldn’t even see the Dartmoor prison two feet in front of us. So we gave up and drove down into Plymouth instead….fish and chips…that’s the solution.

How does this work?? Nice bag of fish and chips and the sun comes out again…this will wreak havoc upon my diet. Never mind. It’s a great British tradition. So it was off to Tintagel. 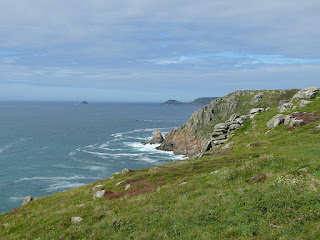 The best thing about Tintagel is that the hostel is situated halfway down a sheer drop along a cliff face and to hear the screams from the back of the bus always brings to mind Bob Monkhouse when he said ‘I’d like to die peacefully in my sleep like my father, not screaming in fear like his passengers’.

So after a meal of jacket potatoes out came the vodka and on came the singing. Always a feature of Czech groups with or without (but mainly with) alcohol. Shame I’d forgotten my guitar. Still, Jaroslav on saucepan bodhran seemed to do the trick.

The next day the weather was tormenting us…would it ..wouldn’t it….yes!! It was a nice one. So we managed to catch the open causeway to the St Michaels Mount before it closed in on everyone and drowned them and stopping in Penzance for some extra re-assuring fish and chips we continued to Lands End itself where the sun shine like it was meant to. And there too were the John O Groatesque cyclists supping from their champagne. So sunny was it , so blue the sea , the sky and the mosquito bites, that Jana decided to walk half the group around the coastal path what she guessed was six kilometres. Six miles later they reached the hostel. 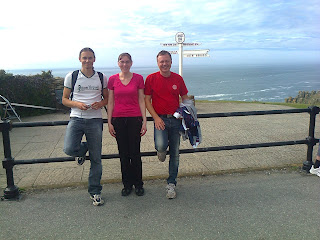 A beautiful sunset at Cape Cornwall helped everyone enjoy their Cornish Pasties and Old Dogvomit cider.

Next day , naturally, it rained. You could hardly see the impressive coast between St Just and St Ives. But we tried. And then we went to the Eden project. Good plan. The sun came out and people started to suffocate amongst the tropical biomes and collapsing tourists. Helpful tip – don’t go in the tropical biome – stick to the more pleasant Mediterranean one.

So we headed off through more pleasant sunshine back across the Tamar and down along the South Devon coast to Salcombe. For anyone who doesn’t know, the Salcombe youth hostel isn’t actually in Salcombe, it’s at the head of an outcrop of rock which takes you up ,down, round, over and through numerous hills and narrowly winding country lanes in which you take your life in your hands. Oh how the people screamed.

Totnes is a nice place where the independently minded shopkeepers have fought off  the multinationals and have even introduced a Totnes pound. Sadly, it’s a shit place for traffic, so we were stuck for a while and got to Torbay later than we hoped. On the positive side the sun came out and the Czechs could have a pleasant wander around the harbour. Then we headed east and stopped at a very sunny Lyme Regis where going in the sea was even an option. They didn’t however. 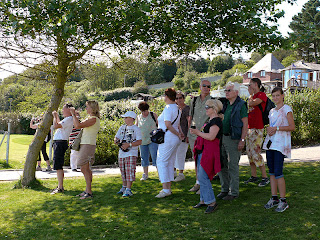 Along the Dorset coast to Weymouth is a wonderful coastline  as you drop down to Chesil Beach with the rabbit-phobic Portland peninsula on the horizon and ending the day in the thatched cottage haven of Lulworth Cove with a special treat of ginger beer (45p a bottle in Aldis) .

No visit to the south west would be complete without a flight home. But before that we stopped in Bath. Where, luckily, it didn’t start the raining until they all got on the bus to the airport.

And off they went.