Rock tours have been a feature of the Bridgwater-Czech link. The very first trip to our twin town,Uherske Hradiste (then part of Czechoslovakia) in 1992 took the form of a rock tour. With only the Cliff Richard film ‘Summer Holiday’ to go on as a template we nevertheless set a trend. For most of the years from then till now we’ve run at least one rock tour a year. For the past few years-admitedly-we took a break. A combination of, shall we say ‘over-excitable youth’ (trashing places, getting too wrecked for their own good, and not exactly respecting the culture they were visiting) and, well, it’s a long way to go to a place where no-one knows you . This year, however, we decided to go for it again…..the horror…the horror…..

Luckily , our fears were as unfounded as a consistent policy in Nick Cleggs manifesto and the tour went ahead, and went well, and the bands were great, the Czechs (that turned up) were responsive and nobody trashed anything. Except one minor incident with a cleaners trolley. But that’s hardly the Jonestown Massacre.

The 3 bands that travelled over to Czecho were RUN FROM ROBOTS -probably the most energetic and professional band with a stage presence to match to come out of Bridgwater in living memory, NEW YORK CITY COPS, following in that great tradition of ‘what sort of music is this exactly’ but neatly blending onstage prose with offbeat cataclysmic guitar,drum and bass work alongside the oh-no-we’re-not-jazz but nicely counterpointed guitarwork nevertheless ARABIAN CHATLINE. It has to be said, all of these bands can be found on You Tube-so don;t take my word for it…however, a word of warning if you enter the last band into a search engine you actually will have to wade through long nights of actual Arabian porn to get to where you want to be. 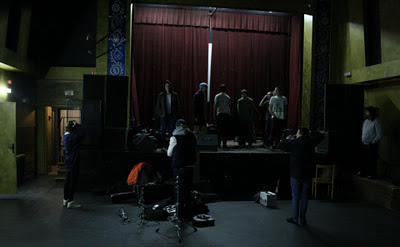 The bands all flew. So that made a change. No minibusses full of cramped ,aching,where the frig are we and is this worth it, nomads instead a beaming smiling fit and bouncy bunch of blenders awaiting their gear. In this case driven through the day and night by Brian and Nigel. (a comedy duo from the late 70’s)

Taking a risk-by staying at the plush (well, in comparison..) Arlington hotel in Prague , which paid off, the bands played 3 nights in the Czech capital. Probably 2 too many as it thinned audiences out a bit. But those that came loved it.

Popocafepetl is a town centre venue on the street ujezd at the foot of the Petrin hill. It was tour leader Brett Pracowniks birthday and so after the gig we didn’t see any of them again. Least of all Brett who was the last to get back to the hotel-just in time to not have breakfast- who had got lost somewhere between the centre and the Arlington and had inadvertantly trespassed into someones land and been chased out by a man with a big pole. Well, that was his story. 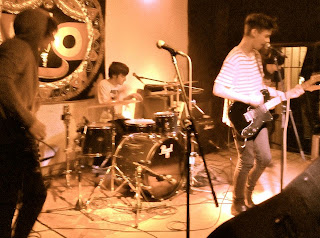 Motoraj– well, we’ve played there before and should have realised it wasn;t the best place to play.  The nearest bus stop ‘Odlehla’ translating as ‘very far away from anywhere’. So they played, and left, and no one noticed.

Travelling on by fast Czech train to Moravia the bands arrived at Uherske Hradiste in time for some autumnal sportyness. Antonin Machala-the co-founder of our link- had set up a football match against his workers and threw  a barby for the guys as well. The game was won 9.2 by the Czechs. Beer was eaten and sausages drunk.

Saturday saw a new venue for us. Radek and Marketa in the nearby city of Zlin had a cafe. The Kavarna coffee bar (translating as ‘the coffee bar coffee bar’) and they wanted to christen  with some Britrock. The small venue was packed and the Jack Daniels helped to wash down the tables full of chlebicky provided for the bands. 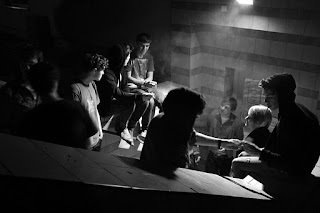 Sunday saw the bands play at the Mir Klub in UH. A popular venue in the past – and the Zlin crowd turned up as well. However, the dance floor was taken over by some crazily eccentric Russians and Slovaks who were working at our partner klub Akropolis and who seemed determined to attempt to depict the siege of Stalingrad in a cross between a mosh-pit and some ill thought out scrumdown. But a sunday night-the day after a major rock event at the Mir Klub meant their efforts-though laudable- just made them look like the West Samoan rugby team at a beetle drive somewhere in a shed in Stogumber. Bands were good though.

Returning to Prague for the monday the bands tried a new club ‘Klubovna’ in Prague 6 district and played a final gig to an appreciative and, by now, devoted Czech following.

Now let’s think about doing some more of these, lessons learnt, trousers intact.

Bridgwater band ARABIAN CHATLINE who recently toured the Czech Republic have brought out their new single LIONS AND TIGERS and the video features images from the recent Czech rock tour including the football match at Altech organised by Antonin Machala.

The Lions & Tigers single is now available to buy on bandcamp http://arabianchatline.bandcamp.com/