The Bridgwater based Community Choir VOICE OF THE PEOPLE have just returned from a successful 4 day tour of the Czech Republic which included visits to Prague and our twin town Uherske Hradiste.

In Prague the 40 strong group had a party with some of our Czech friends at the Zlaty Pretzl cellar bar in Malostrana which featured traditional songs from Ctirad Pavlu and the Jazz band VKV Trio plus a selection of the choirs own songs from around the world. Not being detered by not having an official performance in Prague, the choir chose to spontaneously burst into song at almost every stop on their journey – Wenceslaus Square, the Metro, the Airport, the pub….and always enthusiastically 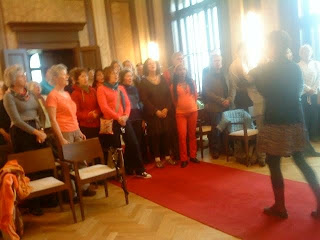 Journeying Eastwards into increasingly consistent rain, they visited Uherske Hradiste and were received in the opulent Town hall by the vice-mayor Evgen Uher – and so inevitably spontaneously burst into song. And again at the new model fountain in the main square.

The rain took it;s toll on the planned evening event – which was meant to be an open air performance at the Modra Ope n air museum of 9th century life – but as floods swept their way towards UH, it was decided to move the concert to the nearby Culture Club. At this event they performed alongside the country band Loncaci and a folk song and dance troupe from the Stare Mesto Gymnasium. The group sampled home produced Moravian wine and joined with their hosts for numerous spontaeous combustions into the songosphere.

On the final night Mayor Uher turned up with his clarinet and his band to play at a farewell party for the band sponsored by Antonin Machala of Altech – the co-founder of the Bridgwater-UH link. 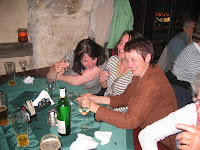 The joined in with spontaneous outbursts of singing.