Zdena Biggsova and a group of 30 teachers from the Kladno area have just completed a week long tour around Ireland and taken in a bit of England and Wales on the way.

Flying to Robin Hood airport ,Doncaster, the group travelled in 2 minibusses across the Penines to North Wales. Stopping at Conway they enjoyed fish and chips and a walk around the town walls before continuing into the Snowdonia national Park where they stayed at the Pen y Pas hostel . Early the next morning they headed off across Anglesey to take the Holyhead ferry to Dublin. Staying at the An Oige hostel in Dublin near Parnell Square, they had a guided tour of the town centre and an evening at the Arlington bar on the banks of the Liffey where they were entertained by irish music and dancing.

After 2 nights in the Irish capital they travelled North to Belfast where they took on board quite a lot of rain thus thwarting their attempts to have an enjoyable walking tour of the Northern capital. They chose instead to travel by minibus across the ‘peace 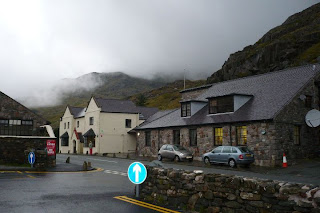 line’ (which divides the Protestant Shankill and the catholic Falls roads) in an attempt to understand the years of conflict,before moving on to the Antrim coast and the Giants Causeway then westwards to Derry and a night in Errigal, County Donegal.

A rainy night in Sligo at ‘Yeats Village’ included a visit to the poets grave, while the following day the group chose to climb Croagh Patrick the mountain which the Saint Patrick himself climbed up and without any shoes on. Some of the group managed it to the top.

After driving through the glens of Connemara the group spent a musical night in Galway city before travelling on eastwards through Athlone , across the Shannon and back to Dublin. 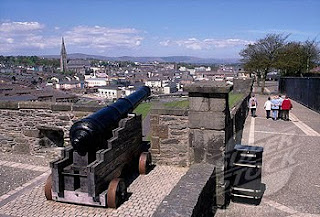 Early morning ferry to Holyhead and another stop in Conway for more fish and chips then an afternoon in Liverpool meant that by the time they reached the stately Ilam Hall in the Peak District it was pretty late and they had to leave at 5am anyhow. Which they did via the Robin Hood airport, South Yorks – as the outlaw himself probably would have done.